Give the gift of pleasure: A Womanizer

Give the gift of pleasure: A Womanizer 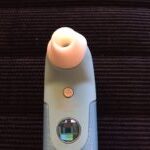 The Womanizer is a wonderful gift to give to yourself or to your partner!

As many of you know, I am not the biggest fan of vibrators.  I don’t hate them, but I do see how over use of them can really have an impact on a woman’s ability to have a clitoral orgasm on her own or with her partner.  Vibrators can easily numb out the clitoris making orgasm really challenging and can also start to condition our body that we can only orgasm through intense stimulation.

But there’s something new on the market that I’m excited about:  The Womanizer clitoral air stimulator.  This toy, which was developed by a Swiss company, has been in the U.S. now for several months.  The Womanizer, despite it’s horrible name and pink case,  is revolutionary.   Rather than provide vibrations, this toy stimulates the clitoris through suction, which feels closest to the feeling of having oral sex.

The Womanizer is very gentle, which is particularly important for women with a very sensitive clitoris or a small clitoral hood.  Many women report very deep and intense orgasms with this toy and orgasms that build up over a few minutes, which is more similar to oral or manual stimulation.

The Womanizer is made of silicone and the suction piece comes off easily for washing. You can use a bit of silicone based lube or coconut oil to help place the cup or if you’re feeling very dry.  The toy has five settings which I personally found useful to increase arousal.

It’s not perfect, what toy is?  On the higher settings it does make some noise, but nothing close to the magic wand.  Also while you can increase settings with the controller you can’t decrease them.  You have to shut it off and start over again.   It’s also not waterproof which is a shame because using this in a warm bath would be amazing.   Let’s hope the next version is!

It’s a bit of an investment with a price on Amazon of $189, which was the lowest price I’ve seen and probably the highest of any clitoral stimulator currently on the market.  There is an updated model that has been released in Europe but has not yet made it to the United States.  Apparently it is quite a bit smaller, quieter, and has more settings but is still not waterproof.

The Womanizer gets my vote and would be a wonderful stocking stuffer for your partner or a delicious gift to give yourself!

P.S.       Unfortunately I was not given a Womanizer to review from the manufacturer and actually shelled out the money myself which was well worth it!