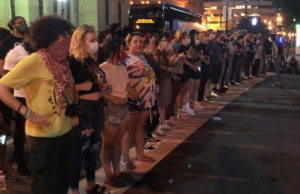 Watching the events unfolding this past week brings both a tremendous amount of anger, sadness, and pain for me. And yet in the midst of the chaos, I have a sense of hope.

The feels this week have been intense. Watching peaceful protesters being tear gassed, shot at, and subject to even more police brutality, even in my little peace-loving, tree-hugging Asheville community, enrages me.

The actions of the Fascist Inciter-in-Chief, and his spineless lackeys, who have essentially declared war on the American people is beyond deplorable. Their attempts to further dismantle our democratic ideals and way of life is chilling.

Part of me wants to hide under the covers and not come out until this is all over. But that would be the response that white people have had for hundreds of years in the face of systemic racism, police brutality, and economic inequality for people of color and the indigenous population.

And I realize that I, as a privileged white woman, have been part of the problem. This is where the hope comes in.

The protests that have erupted all over the United States are color-blind, perhaps for the first time in our country’s history.

White, black, brown, asian protestors are all outraged with George Floyd’s death at the hands of the Minneapolis police and the hundreds of other black men, and women, who have been murdered by police for innocent actions and just being black.

And yes, the economic impact of the Pandemic, the unemployment, loss of health insurance, and months of social isolation, have certainly created the perfect ingredients for an uprising of this magnitude.

But there are rays of light. We are having conversations around racism today that we never have had before. White people are beginning to acknowledge the role that we have played in keeping our mouths shut and protecting our own safety and way of life.

Police being arrested, charged, fired for using unnecessary force on innocent protestors.  Police showing solidarity by getting down on one knee, hugging protestors, and advocating for nation-wide changes in policing tactics, including outlawing the use of choke holds.

We are also all observing how militaristic our police force is and experiencing first hand, regardless of color, what police brutality looks and feels like.  And it’s likely going to get worse.

I will admit that I have not yet attended a protest for fear of big crowds, contracting Covid-19, and potential violence erupting. But what I am doing now is seriously trying to understand and look at my own white privilege and how that has contributed to systemic racism in this country.

I’m having conversations with people of color about racism and just started to read “White Fragility” an excellent book by Robin DiAngelo, a white woman who speaks in a language that white people can understand.

I’m also gearing up to become even more politically active in this election because our Democracy and way of life is truly at stake.

The hope that I see is that this uprising will mark a turn around point in this country that will cause us to address economic inequality, a broken health care system, and systemic racism that continues to divide and weaken us.

My hope is that, in 50 years, when my grandchildren look back on the year 2020, they will say this was the year that life in America changed..for the good.